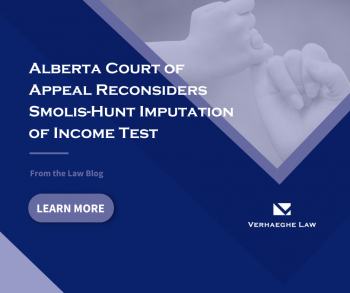 In a recent decision in the Alberta Court of Appeal (ABCA), The Honourable Justice Pentelechuk drew on case law from jurisdictions across Canada to reconsider the court’s approach to matters of income imputation in child support law.

This decision comes on the heels of years of debate regarding the interpretation of Federal Child Support Guidelines in Alberta, and is welcomed by many of the province’s practitioners of family law.

In Alberta, child support regulations are geared to provide the children of separating or divorcing couples with a fair standard of living. Both parents are financially responsible for their children, whatever the custody arrangements. In circumstances where one parent has full custody of the children, the caregiving parent is considered to be providing child support in the form of day-to-day expenses. The other parent, in turn, owes a monthly payment.

The amount the payor parent owes in child support is calculated based on their declared income in Line 150 on their tax return. Ideally, this is an accurate representation of the parent’s financial circumstances. However, in some cases, the accuracy of that amount may come into question.

If a court determines that “a spouse is intentionally under-employed or unemployed,” as stipulated under section 19(1) of the Federal Child Support Guidelines, then it may attribute, or “impute,” a certain amount of income to the payor parent. The imputed amount is based on the parent’s earning capacity, rather than their declared income. This parent may then be required to pay child support based on the imputed income amount.

The interpretation of “intentionally under-employed or unemployed” varies across Canadian jurisdictions. Most provinces interpret this guideline under a reasonableness standard, which allows for flexibility in determining whether or not to impute income.

In Alberta, the interpretation has been more stringent, requiring evidence that the payor parent deliberately chose to become or remain “under-employed or unemployed” for the purpose of avoiding child support payments. The discrepancy between the provinces’ interpretations of this guideline have been the source of debate.

The Smolis-Hunt Imputation of Income Test

The landmark case on imputation of income in Alberta was Smolis-Hunt in 2001. In this case, the payor parent was the father, who, following the divorce, continued working in an unsuccessful legal practice that yielded no substantial prospect of improvement. The trial judge imputed income to him, in accordance with the above-mentioned guideline 19(1)(a).

The payor-father appealed this decision, requesting a recalculation of the amount he owed. His appeal was granted on the grounds that he did not deliberately seek to evade child support by choosing to continue with a line of work less lucrative than his earning potential. With this, Alberta courts established an interpretation that required proof of “deliberate evasion” in order to provide grounds to impute income.

The Problem With Deliberate Evasion

Several problems have been highlighted with the Smolis-Hunt test. The recipient parent bears the burden of proof that the payor parent is deliberately choosing to minimize their income in order to avoid child support. Intent is a subjective notion, and can be challenging to prove. A payor parent may take on a less lucrative career in search of self-fulfillment, for instance. Their financial decisions may not be directly tied to their children - yet the children may nonetheless feel the impacts of those decisions.

In 2022, another case involving a payor-father applying to retroactively reduce his imputed child support obligations came before the Alberta Court of Appeal. Drawing on other provinces’ interpretations of section 19(1) of the Federal Child Support Guidelines, The Honourable Justice Pentelechuk decided in favour of the mother’s appeal that the imputed income stand.

This decision was made based on a test of reasonableness, meaning that instead of requiring evidence of the payor’s deliberate evasion of child support, the court considered whether his employment choices were made within a reasonable framework.

A parent is not required to maximize their income at the expense of self-actualization. However, as Hon. Justice Pentelechuk underlined in the case summary for Peters v Atchooay, “[a] parent’s personal goals and life-style choices do not take priority over their obligation to financially support their children.” There is leeway within a payor-parent’s responsibilities, and the court may deem a range of employment options as reasonable when the question of imputation arises. Ultimately, it is the well-being of the child that takes primacy.

If you have questions or require support regarding a child support matter, reach out to our Alberta family lawyers today to discuss the specifics of your case. Contact us online or by phone to schedule a consultation and see how we may be of service to you.

* Please note, the information in this article does not constitute legal advice. It is intended as a general overview of an area of family law. For legal advice, please consult with a lawyer.